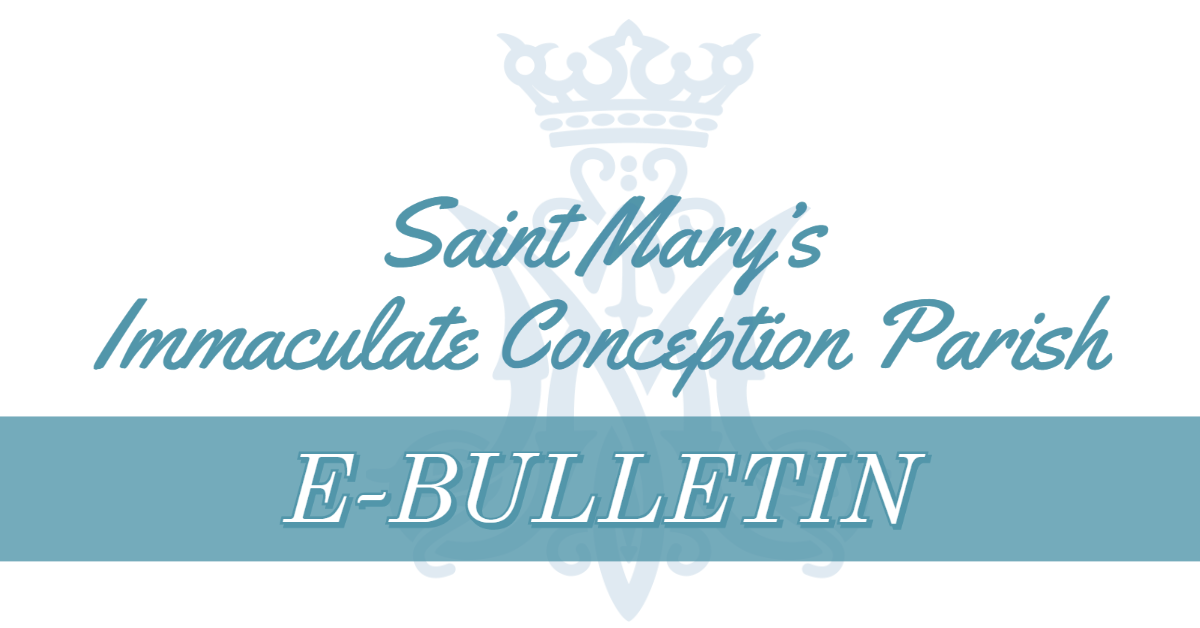 In Catholic circles, the Month of June is customarily devoted to honoring the Sacred Heart of Jesus.  True, we do honor the Sacred Heart all throughout the year in lots of ways, for example on the First Fridays of Ordinary time.  Countless Catholic worship spaces and family homes have statues and shrines to the Sacred Heart which allows for frequent daily acts of homage.  The Sacred Heart is of such devotional importance as a tenet of our faith that even with all the other types of regular examples just offered, it still gets its own month on the devotional calendar.  Indeed it gets its own solemn feast day on the calendar, which occurs every June.  We celebrated the solemnity this past Friday.  June is indeed a privileged time to meditate upon this mystery.

It is providential that this is the case.  If one were to ask most people on the streets these days what June is all about they would probably say “pride month.”  We have by now perhaps gotten so used to hearing this title tossed about in the last decade or so that maybe it has begun to lose the necessary sting that it should have in our ears.  “Pride” is of course a vice and the deadliest of the capital sins.  In any truly Christian culture or world it would have been unthinkable to ever have a month dedicated, even if only by name, to pride itself.  On its face it is actually a very shocking and appalling thing to say: “pride month.”  Pride is not what we want to glorify without some heavy contextualizing.

Contextualizing would be to explain what it is that we are proud of exactly.  And doing so these days necessitates an appeal to “the rainbow.”  Which is of course only a further source of bewilderment to believing Christians who, going back no more than about 20 years, would have first associations of “rainbow” with the Noah story from Genesis.  Yes, the rainbow was the sign that God gave to Noah and his decedents after the flood to remind them that even though humanity had engaged in gross sins of disobedience, most prominently those of sibling murder and the sexual perversion of the Nephilim (see Gen 6:1-4), that he would overlook our pride and never flood us again. The rainbow was a reminder of how God’s mercy overcame the disordered pride of humanity.  So, linking a rainbow and the vice of pride, as we currently do, seems all very confusing to anyone schooled in our consistent theological tradition.

To return then to the Sacred Heart:  the heart of Jesus is a heart that is humble, and it is one of profound love. More specifically, it is a love that is firmly rooted in sacrificing one’s self, and fleeing from the glorification of the sensory, the emotional, the popular, and the convenient.  The way that we can ensure that we love authentically, that is according to what always flees from the sensory, the emotional, the popular, and the convenient is to love according to the moral law.  The consistent moral law of the Scriptures and the Church excludes the very sexual practices that are glorified in the secular observance of “pride month.” Precisely because we seek to love authentically, we cannot accept or seek to "mainstream" what we know to be unacceptable practices or lifestyles.

It is indeed grossly prideful to allow ourselves to think that we are somehow now culturally smarter in our attitudes about these things than our cultural predecessors of prior eras. It is demeaning to them to suggest they were wrong to intuitively know what is fundamentally unnatural, as we busily go about today re-writing the laws of nature at a dizzying pace, while at the same time smugly claiming to be so "green" and "nature-oriented" in our time. If we are going to contextualize "pride month" then cultural hubris seems the best way to do so.

Which is to say that if anyone who is a believing Christian these days finds anything troubling in the secular associations, or the unnatural acts of “pride month,” we should quickly find refuge and conversion in the Sacred Heart.  It is the antidote to what is out of order around us this time of the year.  His humble, merciful, and obedient heart is our example and pattern to follow.  His heart is filled with love even for those who, to their detriment, reject his teachings.  We are reminded in the prayers and readings of the Solemnity that his yoke is easy and his burden is light.  Life is always lighter in the depths of our hearts when we walk according to his designs, even if sacrifices come with doing so. 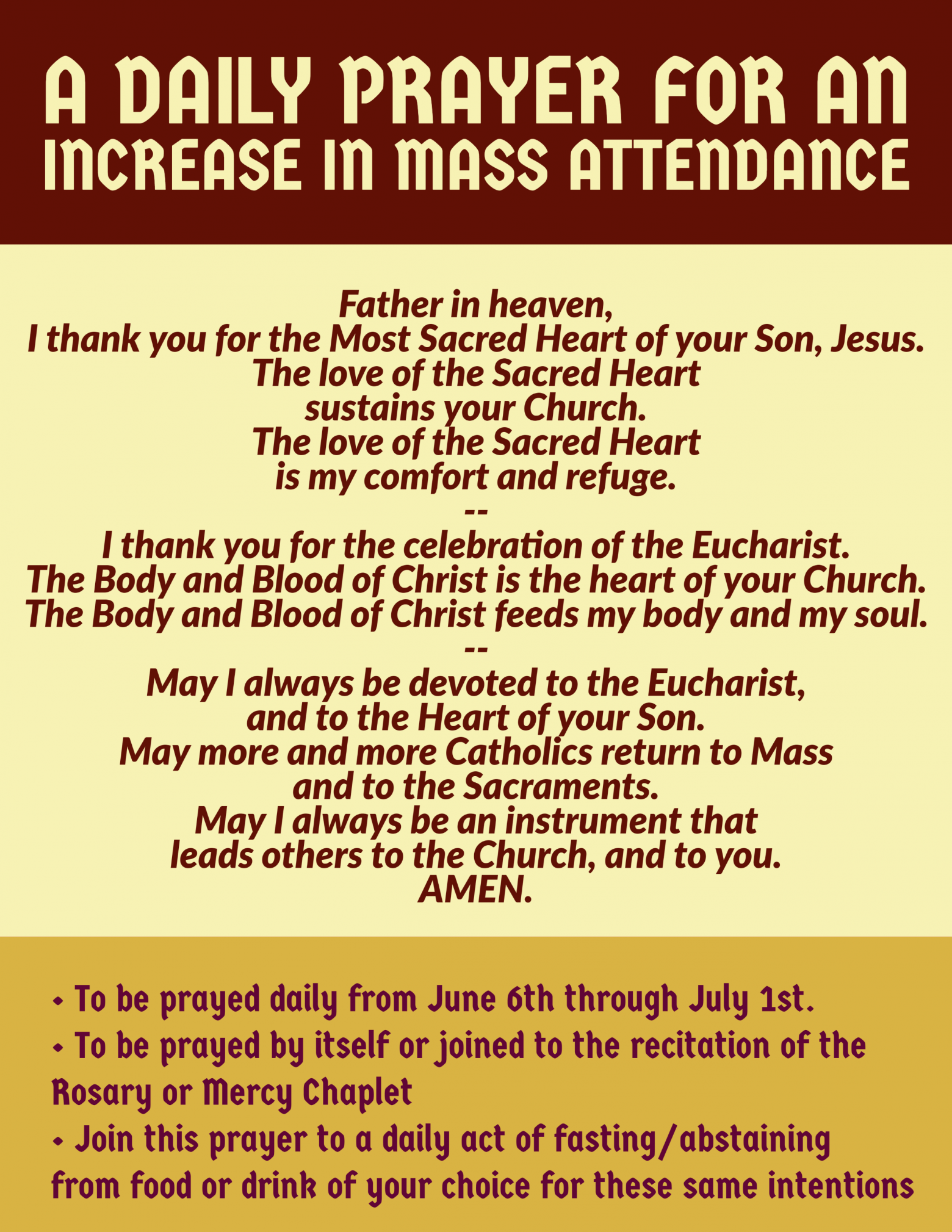 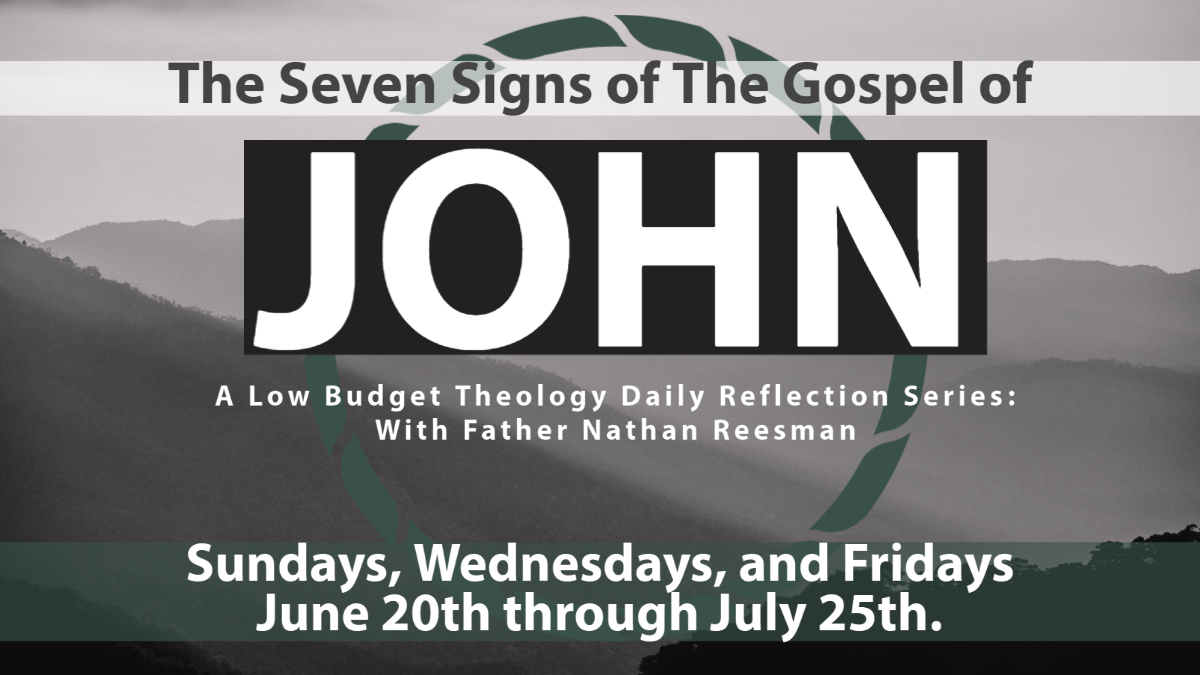 CLICK THE IMAGE ABOVE FOR DETAILS ON THIS NEW DIGITAL FORMATION OPPORTUNITY!

SUBSCRIBE AND HAVE THE SERIES DELIVERED TO YOUR IN-BOX.
SCRIP SALES
Last Day to Order:  Sunday, June 20th
Scrip Sold out of box only:  Sunday, July 27th
No Scrip Sold in July
Sales Resume in August

Make a joyful noise unto the Lord.
The Saint Mary's choirs are getting back together.  If you can sing and want to praise God we would love to have you.  The 7:30am choir rehearses on Tuesday evenings and the 9:30am choir rehearses on Wednesday evenings.  The choirs sing about 3 weekends a month throughout the year and holidays. Please contact Beth in the parish office if you are interested.
Don’t miss out on our many opportunities for youth during the summer!
CLICK HERE FOR DETAILS
*The Way for middle school students starts June 30, 6:30pm-9:00pm.
*Saints in Training Bible Camp - July 26-29.  For elementary students.
(We are looking for helpers for this camp! 6th graders through adults are welcome)
*Catholic Youth Outreach will be doing two local Mission Camps this year with our High School students.  June 21-25 and July 12-16. We are looking for adult leaders.  If you know of any parishioners, families or neighbors who are in need of yard work, painting, small repairs or projects please contact
Mary Abel in the Saint Mary's Parish Office.

Registration is available for Catholic Formation 2021-2022 now!
CLICK HERE
PILGRIMAGE OPENINGS!
The 10-day pilgrimage to Germany & Switzerland with Father Nathan has been rescheduled to September of 2022. There are some open spots.
CLICK HERE FOR DETAILS 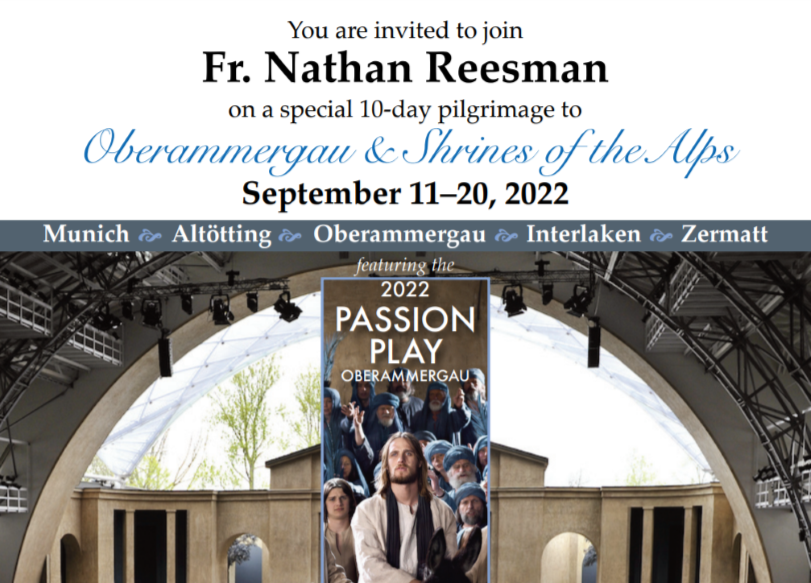 Prayer Shawl Ministry
This group knits or crochet shawls which are then given to persons who may be ill, suffered a loss, or perhaps facing surgery.
Is there someone you know who would appreciate receiving one of the beautiful Prayer Shawls, please call the parish office. If you are interested in learning more about this group, we will be having an upcoming meeting on Thursday, June 24th at 1:30pm in the John Paul Room at SFC. All levels of experience are welcome to join! Contact Mary Puestow 262-305-3306 or Tina Corazzi 262-573-6200 for more information.$$ Monetary donations for yarn supplies are gladly accepted.
The nominations for the position of Trustee-Secretary have been closed.
Mary Swosinski was nominated by Father Nathan and ran unopposed.  She has been appointed to the position for a two-year term, pending approval from the archbishop. 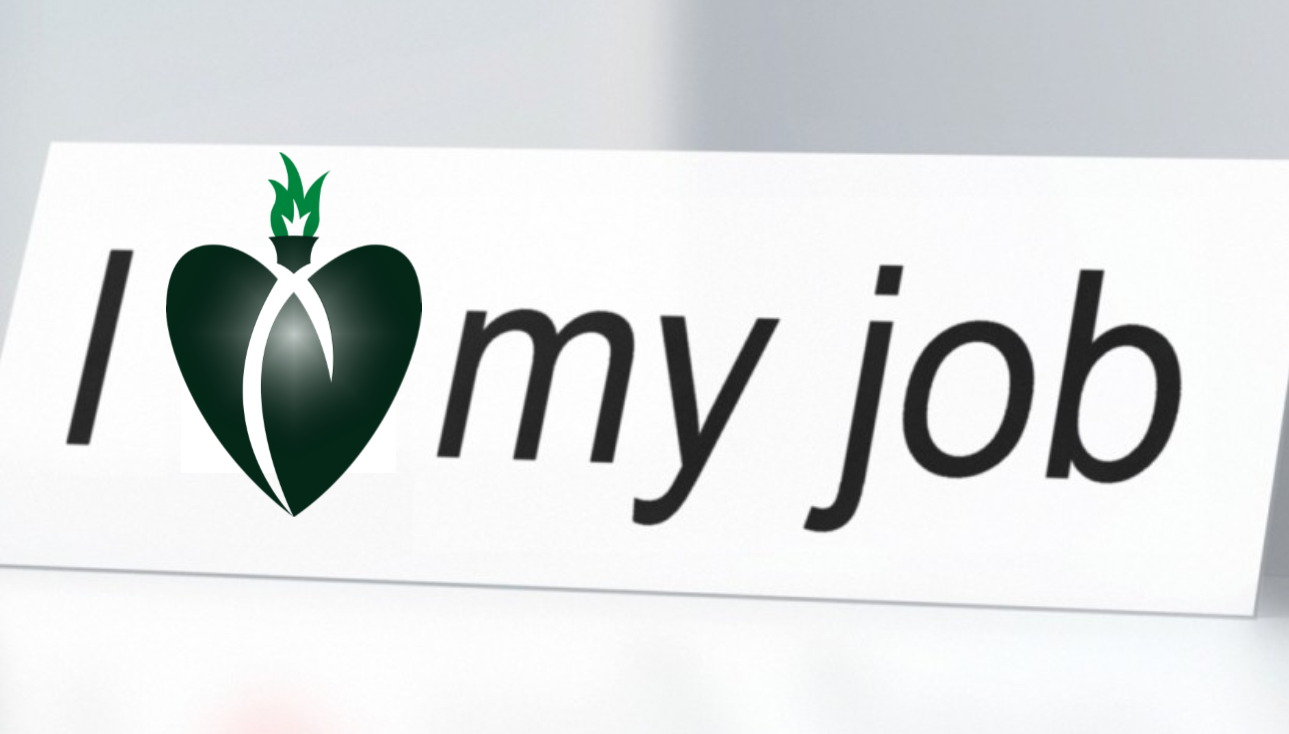 LAST CHANCE TO ENTER YOUR IDEAS!

Do you have an "out of the ordinary" idea that you think would be great for our parish if we just had $20,000 to make it happen? This is our chance to win one of five special awards of $20,000 sponsored by CCF.
CLICK HERE TO SUBMIT YOUR IDEA

STAY CONNECTED WITH US! 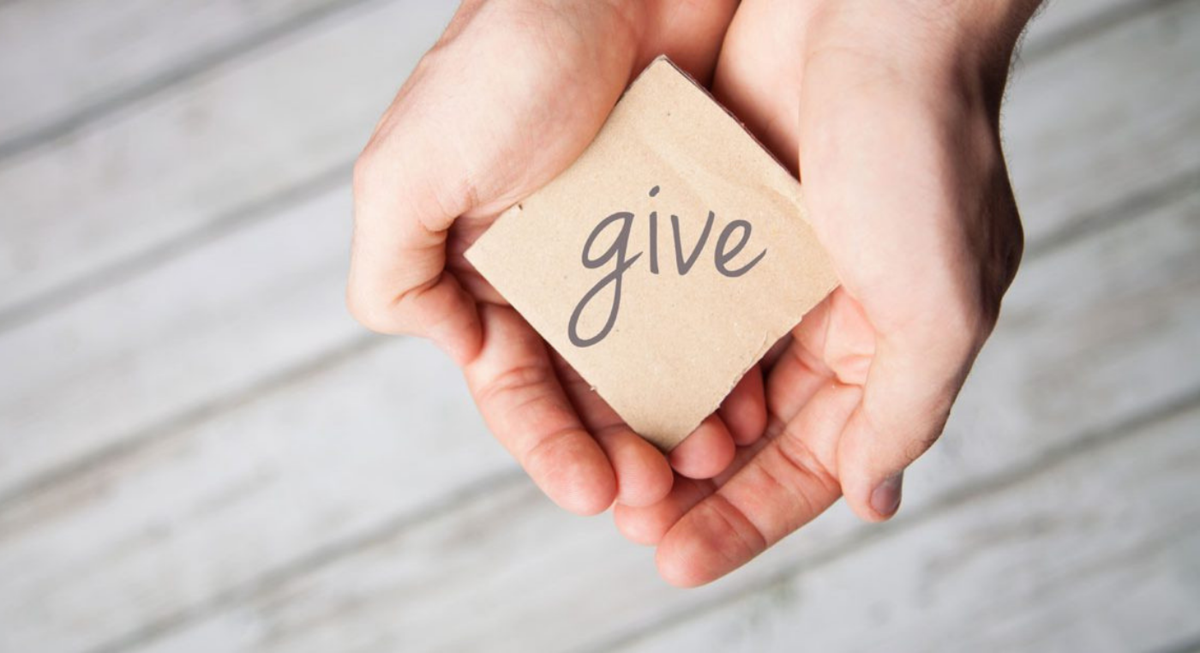 Thank you for your generosity!
click to explore the many giving opportunities at SMIC

Worldwide Marriage Encounter-
REMOTE MARRIAGE ENCOUNTER IS BEING OFFERED NOW!!
Promotes experiences for couples who want to
make their good marriage even better. Visit http://www.wwme.org/ for details.
A LIFELINE FOR MARRIAGE -RETROUVAILLE
For confidential information about or to register for the program beginning with a weekend July 16-18, 2021 in Oconomowoc,
please call (414) 502-7685 or email: Milwaukee@HelpOurMarriage.org or visit the website at http://www.HelpOurMarriage.org
Calling all middle school boys!  Don’t miss out on this year’s Summer Action Retreat hosted by St. Lawrence Seminary High School in Mt. Calvary, WI.  The one day event on Tuesday, June 22nd is $20 and includes lunch, snacks, Mass, inspirational speakers, and lots of fun activities.  For more information and to register visit www.stlawrence.edu/retreats or call 920-753-7570.
Special Needs Help Wanted Are you interested in working with an adult with special needs 5-10 hours/week? This is a paid position.
Please contact Joan at 262 397 6592. 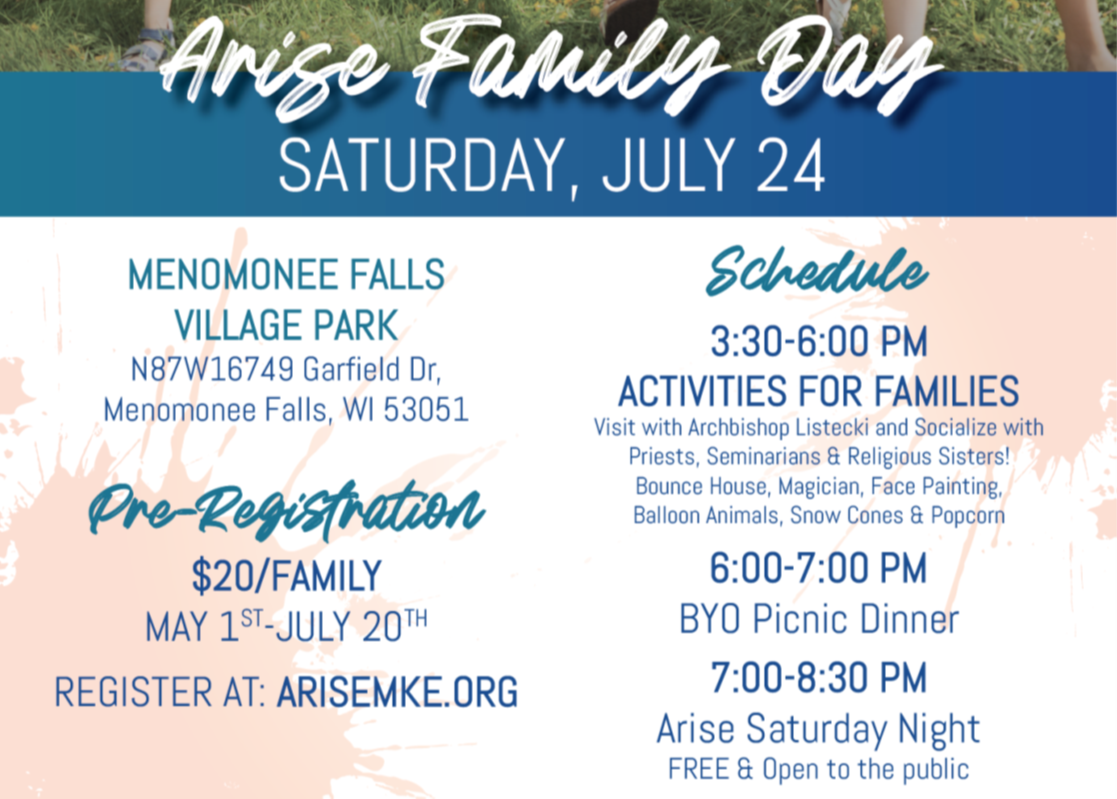 FORMED! CATHOLIC CONTENT ON DEMAND
Get the latest and greatest Catholic Content ON DEMAND
*Go to: THIS LINK
*Search for Saint Mary's Immaculate Conception parish
(or by code: TDRZJQ)
*Click NEXT and create a new account for yourself